With all the attention heaped upon new legal states like Illinois and Michigan, it’s easy to forget about the OG Oregon. The Bulletin reported earlier this week that Oregon’s cannabis sales continue to climb higher. The Oregon Liquor Control Commission reported that sales for 2019 totaled $793 million, which was $150 million more than in 2018.

According to the article, the sales generated more than $110 million in tax revenues. These sales are also expected to reach one billion dollars for 2020.

The top five counties in terms of legal, recreational cannabis sales to consumers were:

Multnomah County is home to Portland, which explains why its sales were so much greater than other counties. The article also noted that the smaller counties of Baker and Malheur were growing quickly due to their proximity to the state of Idaho, which has not legalized recreational marijuana.

The Oregon Economic Analysis wrote, “Obviously recreational marijuana is not legal in Idaho, but even after throwing the data into a rough border tax model that accounts for incomes, number of retailers, tax rates and the like, there remains a huge border effect. Roughly speaking, about 75% of Oregon sales and more like 35% of Washington sales in counties along the Idaho border appear due to the border effect itself and not local socio-economic conditions. Furthermore, and in things you cannot make up, Oregon sales per adult along the Idaho border are 420% the statewide average.” 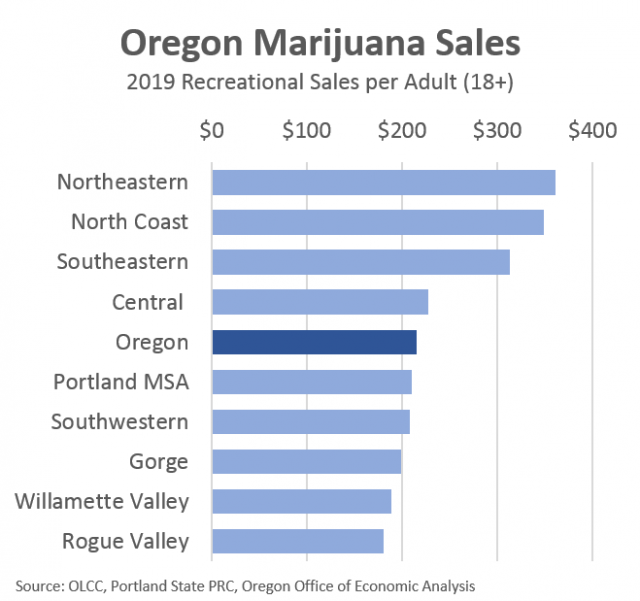 This analysis also points to increased sales along the Washington state line. Even though Washington has legalized recreational sales, there are more stores in Oregon and the taxes are lower. The report wrote, “Finally, the last finding decomposes the differences in sales seen along the Oregon-Washington border itself. Overall sales are 16% higher per capita on this side of the Columbia than the other. This speaks to product availability and the final price to consumers being key driving factors in consumer spending patterns, which create much of the border effect.” 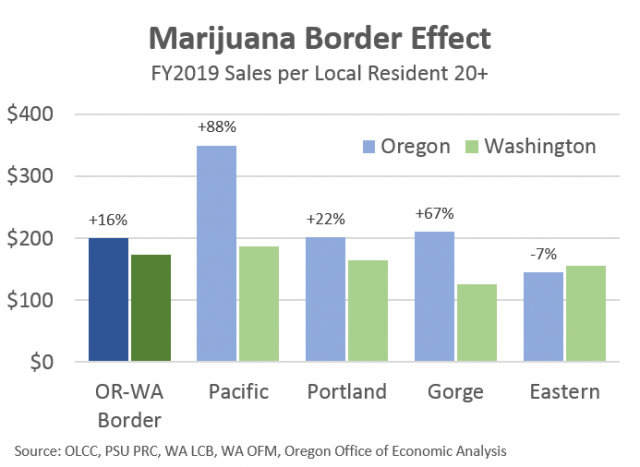 The analysis also stated, “Both Oregon and Washington see a clear impact in higher recreational marijuana sales along the Idaho border than can be explained by local socio-economic factors. Now, this does not mean that all of those larger sales are necessarily to Idahoans. It could be other customers may be traveling from further away or from elsewhere within our state who are traveling through.

All told, recreational marijuana sales continue to increase and are expected to do so in the decade ahead. Our office’s forecast calls for sales to grow approximately 80% over this time period as incomes grow, the state’s population increases, and marijuana becomes more socially acceptable and usage rates rise.”

According to BDS Analytics data cited by Canaccord Genuity in its December report, Oregon’s vape sales declined by 12% year-over-year, while other categories experienced growth. Flower sales rose to 45% versus 39% last year. Pre-rolls grew from 7% to 9% YOY and non-vape concentrates grew from 9% to 11% YOY.

Previous Post Sault Ste. Marie will need to wait even longer for approval of proposed pot shop
Next Post Marijuana Legalization Will Advance In Connecticut This Year, Top Lawmakers Say