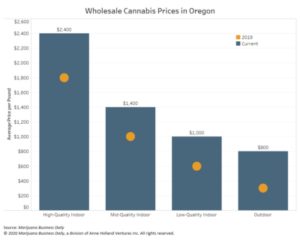 Oregon marijuana growers report wholesale flower prices are improving, which is welcome news for recreational cannabis cultivators in one of the country’s previously most oversupplied MJ markets.

The changed business climate is even leading some growers to expand facilities and ramp up production.

Marijuana growers in the state report wholesale flower prices per pound are averaging:

Oregon regulators set a low barrier of entry to grow cannabis in the state, and steady overproduction drove the market to rock-bottom lows. But prices have begun to rebound for the following reasons:

The cultivation companies that survived on strong reputations for high-quality flower and solid relationships with buyers are reaping the rewards of sticking it out.

“The prices are much better than a similar time last year,” said Pieter Summs, lead grower for Otis Gardens in Hood River.

For Shane McKee, a Portland-based grower and owner of Shango Premium Cannabis, liquidity is good enough that most of his inventory doesn’t last more than two or three weeks.

He said he recently sold a batch of flower for $2,400 a pound, which is on the “top side of the market.”

“It’s been quite a few years since prices have been like that,” McKee said.

The increase in prices is the result of many operators not making it through the toughest times of the oversupplied market.

Brad Bogus, vice president of growth and marketing at Confident Cannabis, a Palo Alto, California-based software company that tracks wholesale MJ markets and facilitates trades, said this time last year a lot of marijuana was selling for $300 a pound.

“That caused some culling,” he said. “More farmers have left the market this year.”

Some of those businesses forced to shutter were probably under-monetized, Bogus said, or were better at growing cannabis than the nitty gritty of running a company.

“Two years ago, it was tough for anyone to even get someone to buy your cannabis,” McKee said.

Aside from the companies that gave up on growing, he also knew of a lot of businesses that downsized and weren’t growing at full capacity.

Kevin Hogan, president and co-founder of vertically integrated cannabis company Oregrown, based in Bend, said he’s sure there are a number of people who are licensed but not growing.

He also said more cannabis cultivators are pivoting to hemp and the CBD market in particular, a trend that Marijuana Business Daily first reported on in 2018.

Bogus backed that up, saying, “A lot of companies diverted a lot of their production to the hemp market after the (2018) Farm Bill passed. A number of those companies have really dug in.”

The move from marijuana to hemp has been significant enough that state regulators instituted a raft of compliance rules that both marijuana and hemp companies must abide by in 2020.

Now, according to Bogus, some cultivation companies can steadily fetch $1,800 or more per pound based on brand reputation and quality.

Both Hogan and McKee are increasing production for 2020.

“We’ll have twice as much flower production this year than we did last year,” Hogan said.

Oregrown’s adding to both its indoor and greenhouse capacity, maxing out its 40,000 square feet of licensed canopy.

But he cautioned cultivators in the newer markets that the oversupply situation and bottom-of-the-barrel wholesale prices that happened in Oregon could likely happen elsewhere.

“We were the first ones to go through the nightmare,” he said. “Some of these other states are next.”

The cannabis growers who have weathered the storm have by necessity been forced to operate as lean as possible.

Summs said when prices dropped, it forced his business to scrutinize its practices and cut every unnecessary cost.

“We went through everything,” he added, saying the company went as far as eliminating stick traps for rodents and fertilizers that were just sitting around.

“People have to chip away at every cost and maximize efficiency,” Summs said.

Paying attention to the hot strains in the market also helps growers fetch a premium for product.

Growers seeking $2,400 a pound or more in the market should be cultivating the popular strains such as MAC 1 or GMO, according to Summs.

Most cannabis flower needs to test at 27% THC or higher to command that premium.

Those who have survived are now being rewarded by a market with steadily increasing demand.

According to a recent study, Oregon has more marijuana retail stores per capita than any other state.

Hogan said that on top of the increased prices, his retail stores sold 20% more last year than in 2018, and that’s with prices decreasing by 40%-50% at the retail level.

“The demand for cannabis products is greater than it’s ever been,” he added.

Bart Schaneman can be reached at [email protected]