Inside or out? As mainstream greenhouses pivot to hemp, producers talk costs, rewards 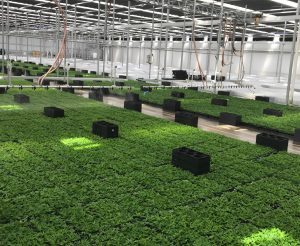 Hemp plants in a hurry? There’s a hack for that.

Hemp can get off to a stronger and faster start in farmers’ fields if it’s been properly germinated or rooted as young plants, greenhouse operators say.

Growers can choose from a number of young plant inputs, based on their farms’ needs, and there is no one-size-fits-all approach; however, there can be benefits and drawbacks depending on timing and other factors.

For example, compared to waiting to sow seed directly in the field, producers can save four to five weeks on their season by planting seedlings or liners (clones), according to Tami Van Gaal of Griffin Greenhouse Supplies, a horticultural plant broker and supply company.

“Folks can’t just plant earlier, because if they plant too early, they’re potentially under an inductive photoperiod. So it makes the most sense to wait until late May in most areas” so the hemp doesn’t go into flower too early, Van Gaal said.

While the input cost is higher – both for the plants and the labor to put them in the ground – growers may save money and time in the end by using young plants that are already established and can be sexed to reduce time culling males later.

“There are certainly a lot of people still looking to start from clones and liners. But there are other people looking at ways(to) decrease input costs and increase profitability on the crop,” said Van Gaal, whose company sells seedlings and clones to farmers on behalf of hemp plant breeders.

At about half the cost of an asexually propagated clone or liner, seedlings or plugs offer one way to do that, either by purchasing germinated seeds through greenhouse producers or for experienced farmers to grow their own plugs. But there are technical aspects farmers need to keep in mind, Van Gaal told Hemp Industry Daily.

“The hypocotyl (stem) on a hemp seedling is really quite big compared to other crops. … It has a tendency to grow tall and fast, and we don’t have any (plant growth regulators) we can use on hemp, so if you’re not used to growing aggressive seedlings without the use of PGRs, you’re setting yourself up for some pretty big challenges right out of the gate.”

If the young hemp plant gets too tall, it will be less robust when it’s planted into the field, Van Gaal said, so for farmers who don’t want to take the risk with planting their own seedlings, it makes sense to buy the plants in from a young plant specialist.

Experienced propagators can help maximize the quality of farmers’ inputs at the young plant stage, from improved germination rates to the consistency of rooted cuttings and controlling growth with temperature and light, and then acclimate young plants to the outdoors before shipping to the farmer, according to Travis Higgenbotham, co-owner of The Hemp Mine, a hemp plant breeder and producer based in Fair Play, South Carolina.

“This saves the farmer in production costs if they were considering to do propagation themselves for the first time,” Higgenbotham said.

“We’ve learned that even something as simple as a single extreme dry period can cause premature flowering or hermaphrodites later on down the product cycle.”

Since the 2018 Farm Bill passed, commercial greenhouse growers long established in the ornamentals and vegetable industries have been gearing up to produce hemp young plants as a shoulder crop for their traditional offerings.

That’s why several hemp plant-breeding companies have developed strategic partnerships with greenhouse operations across the country to aid them in producing and distributing hemp young plants for farmers nationwide.

“It’s one thing to grow the plant in the greenhouse; it’s another thing to get it to all of these different farm locations and in the ground so that the plants are able to get to a running start,” said Jonathan Vaught, CEO of Fort Collins, Colorado-based Front Range Biosciences.

“A lot of these companies have developed infrastructure and trucking relationships and routes that allow them to address that issue head on and execute.”

With specific plant growth budgets to keep costs in check and stringent sanitation requirements to ensure growers receive clean product, young-plant specialists have developed methods for growing millions of plugs and liners affordably, scheduled within a specific time window, to be available for farmers to plant in the field when needed.

“Predictability is a big deal – we live on timelines,” said Frank Yaun, ornamental and hemp sales manager for Speedling Inc., a young plant producer with facilities in California, Texas and Florida.

“Having a history of producing plugs and liners is critical so we can make sure that we have it on time when (farmers) need it, and it’s hardy, stable and ready to go to the field.”

Following a few frustrating years for hemp farmers working with unreliable seeds, the industry is at