Illinois Recreational Cannabis Sales Off To A Strong Start

The highly anticipated adult-use cannabis program in Illinois rolled out yesterday morning. The maximum amount of dispensaries allowed in the state for 2020 is 185, though only 43 licenses were approved at the time of the state’s new industry launch. Six of these approved licenses were not able to begin sales on the 1st for various reasons.

The open dispensaries hosted a huge turnout for those hoping to be among the first to purchase recreational cannabis products in Illinois. Chicago based Cresco Labs expected as such and rented out an entire nearby coffee shop for patrons to take shelter from the cold while they wait. Among one of the first to purchase was Julia Stratton, lieutenant governor of Illinois. She told the Chicago Tribune she purchased gummies at the Sunnyside dispensary in Chicago.

Cannabis giant, Green Thumb Industries opened a store called Rise Joliet in Illinois. Rise Joliet brings GTI’s total store count to 40 nationwide. Founder and CEO Ben Kovler says, “January 1 was a historic day in Illinois as adult-use cannabis sales launched in Illinois, and we’re honored that Rise Joliet is part of that history. Our stores that sell to all adults 21+ – Rise Mundelein, Rise Canton, Rise Joliet, and 3C Joliet – have served thousands of people so far and the energy and enthusiasm from new customers has been overwhelming.”

Cresco Labs announced that they served 3,145 people at its five Sunnyside Dispensaries located in Lakeview, Elmwood Park, Champaign, Buffalo Grove and Rockford, Illinois on the first of the year. They sold 9,258 cannabis products, including Cresco’s house of brands and items from other Illinois suppliers, with the average ticket price being $135. 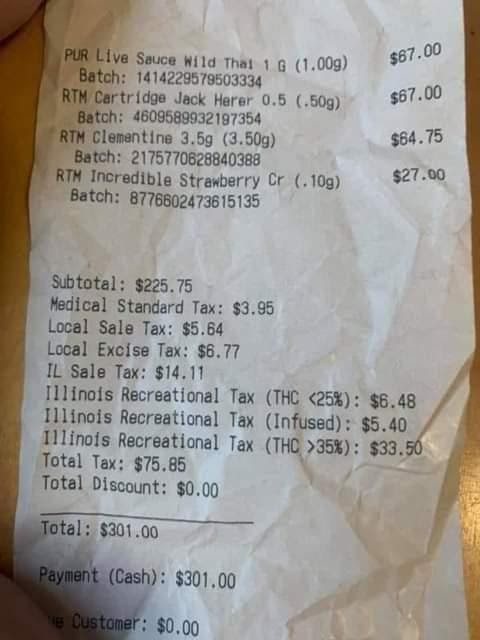 There is also concern that the state is putting profits above its citizens who are medical cardholders. Illinois medical marijuana program launched in 2014. Illinois had one of the strictest medical cannabis laws in the state, but until the adult-use cannabis program patients usually had no problems obtaining their medicine.

Darren Miller, cannabis advocate, patient, and entrepreneur credits his life to cannabis. He was denied his medicine two days before the rollout of the adult-use program. The dispensary where he has purchased his medicine for years without issue, claimed low supply when he went to purchase it. On January 1st, thousands of folks got their recreational product without issue. Miller says, “They went from about 50 kinds of cannabis flower to three overnight. Then the recreational thing starts and all of a sudden they have no problem finding product to sell for major money markup. All of the patients who have been going there for four years, we actually saw this coming. We called it, and now we are witnessing it.”

The adult-use market in Illinois has been projected by Marijuana Business Daily to potentially generate up to $2.5 billion annually, depending on how many tourists take part in purchasing cannabis products.

Previous Post New Fire & Flower cannabis store set to blossom in Toronto’s Chinatown area
Next Post When it comes to pot prices, the grass really is greener on Canada’s side of the fence

Where To Buy CBD in Tampa | BUY CBD OIL

Where To Buy CBD in Tampa | BUY CBD OIL