Colorado Gov. Jared Polis (D) unveiled a plan on Monday to aimed at expanding the number of banks and credit unions that work with the marijuana industry.

At a press conference announcing the new “Roadmap to Cannabis Banking & Financial Services,” Polis was joined by state regulators and Rep. Ed Perlmutter (D-CO), the chief sponsor of pending congressional legislation that would shield banks from being penalized solely because they accept state-legal cannabis business accounts.

“Because of these federal prohibitions on cannabis, businesses have been blocked from accessing conventional financial products that other legal businesses take for granted, and the lack of banking opportunities and access to other financial services in Colorado really poses both an economic threat and a public safety threat,” Polis said, noting that many cannabis companies operate on a largely cash-only basis, making them targets for burglaries and other crimes.

“Businesses in Colorado and across the country need certainty, and we have an obligation to do what we can with the tools that we have while we work on this federal fix,” he said. 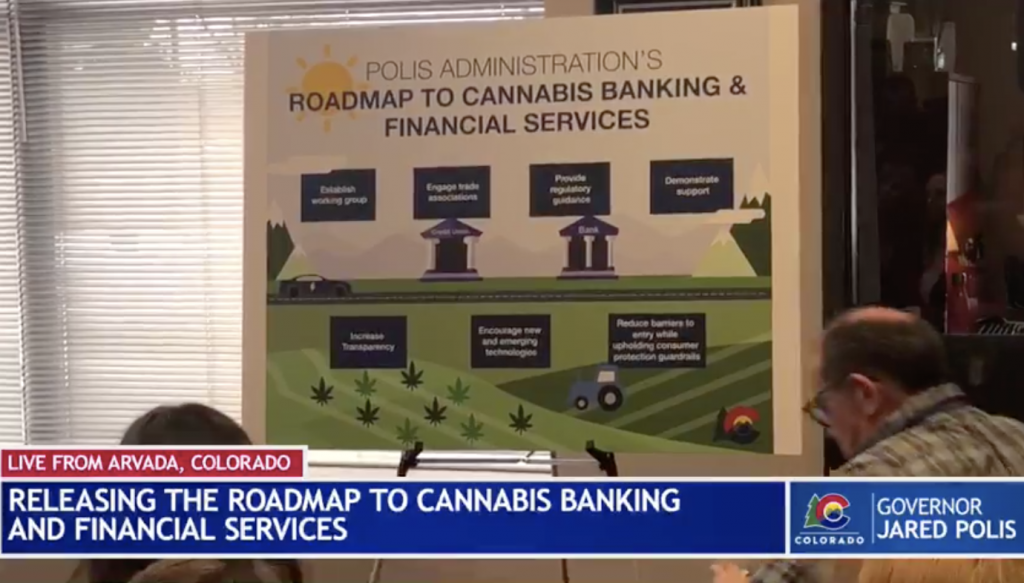 An accompanying document details the plan, which calls for an increase in the number of banks that work with marijuana businesses by 20 percent by June 30—one of several cannabis goals that the state is tracking through a previously announced online tool.

For each element of the plan, the document describes the strategy, policy actions and status of those objectives.

For example, one goal is to provide “guidance for state chartered banks and credit unions providing services to cannabis-related businesses.” To that end, the state’s Division of Banking and Division of Financial Services have participated in more than a dozen roundtables with regulators from other states “to discuss the challenges and opportunities in regulating cannabis-related businesses.” That initiative is ongoing.

Another objective is receive “legal guidance from the [state] Attorney General regarding providing services under the Money Transmission Action and the Trust Companies Act to issue public guidance for consumers and the industry.” As of now, Colorado is “doing an assessment of the specific issues that need to be addressed” and officials hope to get that guidance by spring of this year.

Providing banking services to the cannabis industry protects public safety and facilitates financial transparency. Honored to support @GovofCO and @DORAColorado in the unveiling of the “Roadmap to Cannabis Banking and Financial Services” today. #copolitics #coleg pic.twitter.com/YKQGTLABkJ

“The lack of federal clarity creates a level of uncertainty and apprehension for our Colorado state-chartered banks and credit unions to provide basic financial services to legal cannabis-related businesses,” Department of Regulatory Agencies Executive Director Patty Salazar said. “This roadmap is designed to lay out a path whereby our state-chartered financial institutions can explore whether or not they are in a position to provide services to this industry.”

This is the second marijuana plan rolled out by Polis’s administration in as many weeks. Last week, he announced an energy efficiency partnership between been companies and cannabis businesses that involves capturing carbon released during the brewing process and using it to grow marijuana plants.

Perlmutter, whose federal Secure and Fair Enforcement (SAFE) Banking Act cleared the House with a bipartisan vote last year, said at the press conference that the “bottom line is that Colorado has been a leader on this subject from the beginning, and it remains a leader with the roadmap that the governor [and others] are presenting today.”

The congressman added that he’s optimistic about the prospects of getting the bill out of the Senate Banking Committee and approved by the full chamber. While Banking Chair Mike Crapo (R-ID) has outlined a series of changes he wanted to make to the legislation, including some that industry stakeholders and reform advocates view as untenable, Perlmutter said lawmakers “can work with many of his particular points.”

“We expect movement on that bill in the Senate and, as I said, we’re working with him today,” he said. “Thankfully Colorado is minding the store while we’re trying to get this resolved at the federal level.”

Roadmap to Cannabis Banking by Marijuana Moment on Scribd

Norfolk County planner sounds alarm on medical cannabis growers: ‘There is a loophole … and they’re exploiting it’

Norfolk County planner sounds alarm on medical cannabis growers: ‘There is a loophole … and they’re exploiting it’